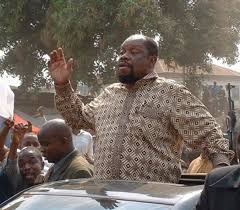 A governorship aspirant in Anambra state on the platform of the All Progressives Congress, Chief Ralph Okeke on Wednesday said the late Igbo leader, Dim Chukwuemeka Odumegwu Ojukwu would have joined the APC should he be alive today. He said Ojukwu would have done that for national integration.
He said, “Most importantly, it is a shame that Anambra state is still governed by a party that exists only in one state. I know for sure that if Dim Chukwuemeka Ojukwu were alive today, he would have joined APC for national integration.
“This is because Ojukwu’s intention  was to raise APGA to be accepted nationwide and win the presidency. But now that some characters have made APGA remain as one state party, I am sure that the Ikemba would have joined other well meaning Nigerians in APC to make Anambra and the country great.”
Okeke who spoke to newsmen in Awka, Anambra state noted with disappointment that Anambra state had not moved at the pace it ought to, considering her possession of human and material potentials.Okeke who was the Deputy Governorship candidate of the All Progressives Congress in the 2013 governorship election in the state election in a ticket with Dr Christ Ngige  said he had been equipped to govern the state and take it to enviable height.
He said “The desire to effect a positive change that will give the hardworking people of Anambra state a new lease of life informed my decision to run for the office of Governor of Anambra state
The Punch