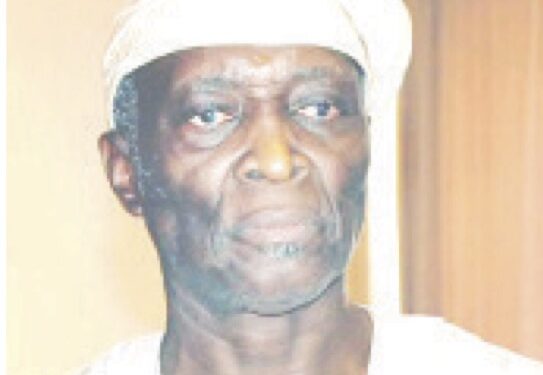 General Secretary, Yoruba Council of Elders, Dr Kunle Olajide has pooh-poohed the Federal Government’s handling of the security challenges in the country, saying such efforts fall below acceptable standards.

While he called on Nigerians to reject political parties that do not adopt zoning as a policy, Olajide said restructuring Nigeria is a must if the country must move forward. He spoke with TUNDE THOMAS

The present state of insecurity has become a source of serious national concern. How do you see the development?

It is an unfortunate development. It is sad that nobody feels safe and secured in the country again. Nobody can move freely within the country again without harbouring fear of being attacked.  It is a big shame that the country has to be pushed to this precipice. It is unfortunate that bandits, kidnappers and all manners of criminals are holding the nation to ransom. It is indeed an ugly development. We never had it this bad before. With the way things are going, we have to pray that these bandits don’t turn Nigeria into another Somalia. With way we are going, if care is not taken, Nigeria may be gradually turned into another Somalia but our prayers is that this will never happen. The Federal Government must rise up to the occasion.

The primary role of the government as enunciated in the constitution is the security of lives and property of all Nigerian citizens, so government has to rise up to the occasion and ensure that we have security restored. If the present situation lingers, God forbid, it might get worse and it might even become unsafe to walk on the streets of Nigeria. All of us must co-operate to put pressure on the Federal Government to react accordingly and ensure that the present ugly situation is brought under control. May God forbid, if the situation deteriorates, nobody can predict what may happen, and that is why we are praying that the situation will not degenerates into what was witnessed in Somalia some decades ago.

How would you assess efforts being made so far by the Federal Government to tackle it, and what do you think is the way out?

The efforts being made by the Federal Government so far are not giving us the desired result. They are failing us. Once you are not getting the desired results for any effort, that means that effort is not good enough .Government must study the situation properly, and prescribe the appropriate measures. The President should also call on the relevant security agencies to buckle up and put in more efforts. The present efforts being made by those in authority are not acceptable. They fall below what I will consider acceptable standards. Government’s effort is nothing to write home about.

On the way out, they have to rejig our security architecture. They have to re-strategise, study the situation properly, and if need be they can call on foreign security experts to come and protect us. Although, this sounds like going to the extreme, but if we have to go the extreme in order to achieve the desired results so be it. There is nothing for us to be ashamed about that if those we put in charge of our security seem to be overwhelmed. Maybe those in charge of our security are doing their best but if their best is not good enough for Nigeria, then we can seek foreign assistance. Those in authority have been holding series of security meetings in the last few weeks, but as far as we are concerned what we are seeing on the field doesn’t justify the meetings, so they must re-strategise and give Nigerians the much needed protection

Some Nigerians have suggested the creation of state police as part of solutions to the security challenge. What’s your view on that?

We have been saying this for years that there is actually no true federalism in the country. If we are practising true federalism, since states are autonomous parts with their own legislatures , nothing stop the states from having their own police not only to protect the people living in those states but also to implement laws made by the states. In the United States which is also a federal state, and which often claim to be our role model, they have state police. But it is almost a paradox what we have in Nigeria. We have been calling for the establishment of state police because its set up will go a long way in helping to tackle the security challenge. But for the reasons known to the federal government it has not been showing interest in it.

Although state police may not be the sole antidote to the security challenge, it is part of the solution to it, and this is why it would be a good idea for the Federal Government to embrace the idea.  But Federal Government must also look for a way to deal with the issue of ravaging poverty in the country. Poverty fuels insecurity, so government must as a matter of urgency look for a way to address it.  It is not possible to eradicate poverty but it can be minimized. Poverty often drive some people to take to crime. I don’t see any reason why Federal Government should not be receptive to the idea of state police, may be because government believe that state governments may abuse state Police. But I don’t agree with that because the Federal Government also abuses the federal police.

It is important that we have state police because that will demonstrate maturity of the federal system we are operating. Once you have state legislatures that made laws, those states must have state police to police the laws made by that state legislatures. This is what is done all over the world, and Nigeria can’t afford to be an exception. To me, it appears the present Federal Government doesn’t want to buy the idea of having state police in the country because they don’t want to be challenged by the states, or they want to have sole monopoly of the security architecture.

But this is an exhibition of the immaturity of federalism we are running. We can’t be doing the same thing the same way and expect positive results. State police is part of federalism, and if we want to be seen as a true federal nation, then we can’t afford to do our own things differently. It is unfortunate that the body language of President Buhari doesn’t seem to support the establishment of state police. But whether we like it or not, it is part of the solution to the security challenge. It is sad that the Federal Government want all the security apparatus to be under their grips

What’s your position on the issue of zoning and 2023?

Zoning is not in our constitution but zoning was introduced to ensure that we have a balance because we are a heterogeneous country. It was also introduced to help promote national unity and cohesion. But zoning is not in our constitution.  Zoning came into our national life to ensure that every part of the country has a sense of belonging, but it can’t be enforced under the law. So what is not part of the law can’t be enforced legally.

My advice is that the two major political parties – PDP and APC – should ensure that their presidential candidates come from the South in 2023 and when it comes to the South, then the region can decide whichever way they want it. We have to embrace zoning until we stabilise as a nation because failure to do so will threaten our national unity.

How would you react to the recent presidential pardon granted former Governors Joshua Dariye and Jolly Nyame?

I don’t have any view. It is the prerogative of the President to grant them pardon. Buhari has exercised his constitutional rights by granting them pardon, and that’s not the first time that prerogative of mercy is being exercised in Nigeria. So it is Buhari’s right to do what he has done regardless of whatever opinion any Nigerian has. The Nigerian constitution empowers Buhari to do what he has done, and he will not be the first President to do so. For Nigerians who have been expressing diverse views and opinions on the President’s action, it is also their constitutional right to do so. They have the rights to freedom of expression.

What’s your take on the N100 million and N40 million set by the APC and the PDP respectively for nomination forms and expressions of intent by their presidential aspirants?

Well, I’m not a politician, and I never intended to be one. I believe the parties have their rules and regulations, and members are guided by those rules.

There have been calls on the Federal Government to postpone the 2023 National Census in view of the fact that the exercise is coming up around the same time with the general elections. What’s your position on this?

I agree with those who are expressing such views. Both events are major milestones, and we should not allow any event to jeopardise them. The Federal Government should reschedule the National Census. It is coming too close after the general elections. We should have concluded the general elections and make sure that we are through with that one on a satisfactory note before we now take up the census.

National Census is a major national event on its own that requires serious attention. Just like the general elections, national census is a critical national exercise that we can’t afford to toy with. I pray that Almighty God will give our leaders the wisdom to do what is right. For the general elections, I don’t harbour or entertain any fear. I believe the elections will hold. My appeal is that all relevant stakeholders, including the voters, government, and the electoral umpire, the Independent National Electoral Commission (INEC) should play the roles expected of them. Everybody should play the game according to the rules. If we can do this, there won’t be cause for any alarm.

To resolve myriads of socio-economic challenges facing the country, some Nigerians have been canvassing restructuring as the panacea, do you agree?

There is no alternative to restructuring. Today, terrorism and insecurity has become a big challenge. Lives are being wasted, while property is also being destroyed. Herdsmen are also on the rampage. How do we tackle all these problems? We can’t continue like this as a nation. Restructuring will go a long way in helping us solve some of these major problems facing the country. Without restructuring, Nigeria can’t move forward. That is the bitter truth that Nigerians must face. Today, Nigeria is facing a lot of challenges, how do we resolve these challenges? How do we restore Nigeria onto the path of greatness? For 2023, Nigerians should give their mandate to somebody who possesses the qualities that can help move the nation forward. They should give their votes to any candidate that can restore Nigeria’s lost glory.