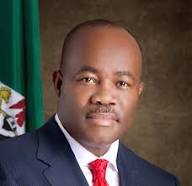 Many States in the North have been flooded with posters of Minister for Niger Delta, Chief Godswill Akpabio, bearing Sallah greetings. Investigations revealed that the posters were spotted mainly in Sokoto, Kaduna and Kano among a host of other Northern States since on Sallah’s eve.

Efforts to reach the Press Secretary to the Minister for his comments on this development proved was not successful. But political observers noted that the poster could be flying a kite towards 2023 presidential ambition.

When contacted, a one- time youth leader and Admirer of Akpabio, Alhaji Bello Bichi told reporters in Kaduna that it is not surprising that Akpabio has a growing number of admirers in the North. “Given the kind of goodwill and respect Akpabio has built in the North for many years it is not surprising to see his posters. As a Nigerian politician he has been a bridge-builder across the North and Southern parts of the country for many years.” Bichi said.

Commenting further, Engr Bello said “if any citizen does something spectacular about uniting this country or helping the poor without recourse to their religious or ethno-regional origins, he or she will automatically cultivate many fans and political recognition. And Akpabio is one such Nigerian”.