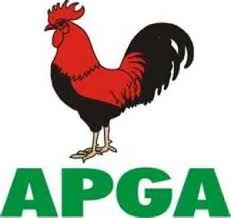 The Chairman of All Progressives Grand Alliance (APGA), Abia State chapter, Prince Ukaegbu, has said former Senate Minority Leader, Enyinnaya Abaribe and others, including the party’s governorship candidate in Abia, may not likely contest the 2023 election on the platform of APGA.

Abaribe dumped his former party, the People’s Democratic Party (PDP), over some irreconcilable differences arising from party primaries, for APGA, where he intends to contest the Abia South zone Senatorial seat against Governor Okezie Ikpeazu, next year.

Ukaegbu who was reinstated as chairman of APGA in Abia state by order of an Umuahia High Court and reaffirmed by the Court of Appeal, Owerri zone, said anybody that went through the process of nomination for next year’s election under APGA and did not go through the legitimate officers of the party in the State which he represents, would not stand the chance of contesting the election.

“The fact remains that anybody that does not go through the process of nomination for elective positions in Abia APGA under my watch as state chairman and does not recognize me as so, doesn’t stand the chance of contesting the coming election.

“Legal arguments are canvassed in court, they are not canvassed at Aba Motor Park, neither at Ubani Ibeku Market. If you feel I’m not the APGA state chairman, kindly go back to court and tell them that the court erred. But as of today, I remain the state chairman, and anybody who does not recognize me as such surely was not going to contest next year’s election under APGA.

“That’s what the law says. APGA is a juristic person that acts through its officers. APGA is a legal entity, only recognized officers of APGA can take action, receive and register people into the party, conduct primaries, nominate candidates on behalf of the party. APGA is not a no man’s land, APGA is not an all-comers’ affair.

Ukaegbu likened the new entrants into the party and we’re given tickets to contest election next to people who bought property from someone that was not a title holder of the property and would at the end not take hold of the property.

He said as things stand presently, Abia APGA has no validly nominated candidates in the entire state, including for the governorship.https://101f573fd1a24c546494ef49cde9c92c.safeframe.googlesyndication.com/safeframe/1-0-38/html/container.html

“APGA I must tell you to have no validly nominated candidates in the entire state. Other than the ones I will forward to INEC, APGA presently has no candidates, including for the governorship.

“APGA would present candidates in Abia state, but through the recognized and legitimate officers of the party. Whatever that was done in this regard outside me as the party chairman, is waste of time and exercise in futility”.

He however said Abia APGA under him will receive those who genuinely would want to contest election next year on her platform.

Ukaegbu who stated his optimism that APGA will win next year’s election in the state said he would continue to fight to realize the vision of the founding fathers of the party.

“We are fighting to put our house in order before the election because if we don’t, we will always have nearly syndrome effect, that at the point of victory, we will beget defeat, that’s what we are fighting.

“I’m happy I have continued to maintain the pledge I made to Dim Odumegwu Ojukwu. Come rain or sunshine, I will not depart from this party”.