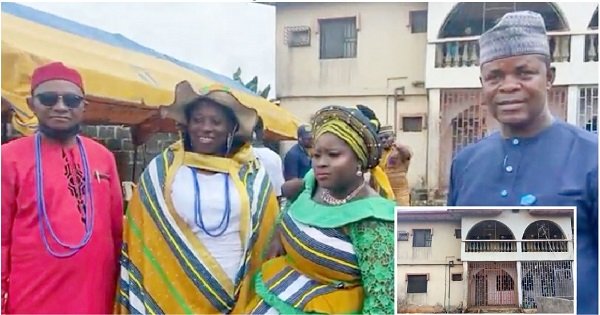 The worst seems to be over for the Oshodi, Lagos amputee water hawker, Mary Daniel. Mary, whose story of losing a leg in an accident that killed all passengers, including her parents when she was a teenager, turned out to be false, is now a proud landlady.

She acquired a house at Igando, a surburb of Lagos from the N25 million raised for her when her story went viral. The building came at a cost of N17.5 millionand will serve as her residence and ‘pure water’ factory. The Kogi-born lady threw a small house warming party yesterday to show appreciation to her well wishers and those who stood by her during her trying period.

In attendance were some of her relations and leaders of the Igala community in Lagos. She thanked Nigerians for their support and expressed happiness at her new status. She also expressed her happiness that her daughter, Success, is now with her and has started school. Mary has two tenants residing already.

She was well known in Oshodi where she used to hawk ‘pure water’ in traffic. Passers-by were often moved by her passion for hawking to earn a living and for showing tremendous courage despite her physical challenge. She became an instant sensation just a few weeks after pictures of her selling water at Oshodi emerged on social media.

Then came the story about how she lost her leg in an accident that claimed the lives of her parents and others in the vehicle in which they were travelling. She claimed she was an orphan with a baby and an aged grandmother to fend for.

She told of how life dealt her several blows and she had to drop out of school and hit the streets to make ends meet. The story moved many Nigerians and the Lagos State Government to raise N25 million for her rehabilitation. This prompted the state government to immediately shelter her to prevent criminals from taking advantage of her sudden fortune. A celebrity birthday party for her soon followed.

But the bubble soon burst after the state government found that her father was alive. It was also discovered she was amputated from birth. Governor Babajide Sanwo-Olu handed her over to officials of the social welfare for investigation following revelations that her case was staged.

She had been receiving strange calls from those who staged her story with threats to reveal the truth unless she gave them their share of the money. She promised some N500,000, others different amounts and was planning to return to her home state when the information leaked