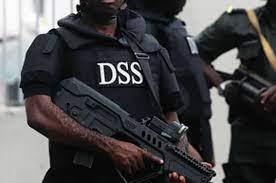 A lawyer to the detained leader of the Indigenous People of Biafra (IPOB), Nnamdi Kanu, Ifeanyi Ejiofor has expressed displeasure about the alleged continued detention of his domestic staff by men of the State Security Service (SSS) since June 6, 2021.

Ejiofor, at a press conference in Abuja on Friday, claimed that his three staff were abducted by a team of heavily armed security agents that invaded his ancestral home in Anambra State in 2021.

The lawyer appealed to President Mohammedu Buhari and the Attorney General of the Federation (AGF), Abubakar Malami to prevail on the Director General of the SSS to effect the unconditionally release his domestic staff forthwith

Ejiofor also spoke about judgement recently given in his favour by a Federal High Court in Awka, in a suit marked: FHC/AWK/CS/56/2022, in which the court declared the invasion of his house as barbaric, uncivilised, illegal and unconstitutional.

He demanded immediate compliance with the court verdict to release his detained workers.

Justice Hassan Nganjiwa, in the judgement delivered on July 22 this year , awarded N109million in damages against the SSS, Nigeria Police Force (NPF), the Nigeria Security and Civil Defence Corps (NSCDC) and the Nigerian Army (NA), who are defendants in the case.

Ejiofor said: “On the 6th day of june 2021, the world was awoken with the shocking news of the second unprovoked bloody invasion of Mr. Ifeanyi Ejiofor’s ancestral home in Umunakwa Ifite, Oraifite, Ekwusigo Government Area (LGA) of Anambra State by the operatives of the Nigeria Police Force, the DSS, the Nigerian Army, and Chukwuka Chizorom Ofoegbu (aka ljele Speaks), during which Murderou invasion, his Personal Assistant, Mr. Samuel Okoro was gruesomely murdered.

“It is pertinent to note that the dastardly act was clearly captured by the CCTV cameras within/around Mr. Ejiofor’s compound, and the published footage speaks for itself.

“These direct descendants of satan thereafter, dragged and dumped the lifeless body of Mr. Ejiofor’s murdered Personal Assistant inside the boot of his Toyota Camry car, which they made away with upon the conclusion of their evil assignment/mission.

“This was shortly after they had pushed out Mr. Joel Ejiofor from their car around Nnobi, and ordered him to disappear from their sight.”