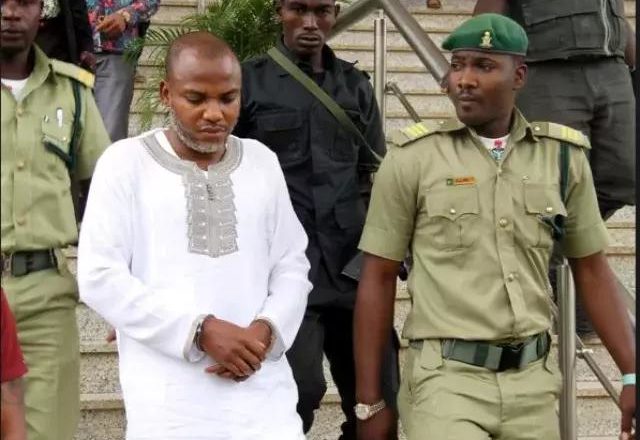 The Indigenous People of Biafra (IPOB) has appealed to the United States of America(USA) to intevene in the continual detention of its leader,Nnamdi Kanu by the Federal Government,describing the country as a world power that can save him.

IPOB in the letter signed by its spokesperson, Emma Powerful, appealing to US for unconditional release of Kanu also enjoined it to speak on their clamoured referendum to pave way for a Biafra nation.

It reads thus “We know through history that it was the United States of America who acted as the world’s conscience to challenge some European countries after the World wars and compelled them to let their colonised African nations go with flags of independence from 1950s.

“Nigeria is one of such countries that gained their independence during that Era. Dear USA, we the Indigenous People of Biafra (IPOB) call upon you today to complete the work you started then.

“African nations are still trapped in false amalgamation that were not Germain to our ethnic makeups. In the case of Nigeria, the colonial masters are still using their influence to oppress the Indigenous nations. One such situation that has caused us to rise up and cry out.

“Nigeria is polluting our land through oil exploration and extraction and when we ask them to clean it up, they kill our people, raze down our communities, bribe our leaders and few politicians place other heavy burdens of oppression on us in other to shut us up.

“As if all the oppression is not enough, the Fulani terrorist herdsmen has entered Nigeria with a jihad agenda that has been supported by the Nigerian Fulani politicians. This Fulanized Nigeria government has extraordinarily renditioned the leader of The Indigenous People of Biafra, Mazi Nnamdi Kanu from Kenya to Nigeria. Mazi Nnamdi Kanu is not a Nigeria citizen but has for along time taken up British citizenship.”

“Why did US Government keep mute during the Biafra genocidal war by the Nigerian Government with support from the Britain and her allies where over 5 million innocent Biafran lives were wasted between 1967 to 1970 and till date?

“Why the US Government kept mute in the face of extraordinary rendition of Mazi Nnamdi Kanu by Nigeria Government in violation of international law and protocols? While still keeping him in their detention facilities.

“Why the US Government still kept mute in the face of continue illegal detention of Mazi Nnamdi Kanu by the Nigeria Government and even after competent Courts in Nigeria (Abuja Appeal Court and Umuahia High Court) pronounced him discharged and acquitted since 13th October 2022 and October 27, 2022 respectively and thereby violating his human and fundamental rights?

“Why is the US Government still keeping mute and not prevail on Nigerian Government to start the process of referendum for Biafra People to determine decide to remain or go on their separate way based on self determination principles?

“American Government must rise up and do the needful and redeem their image and integrity of the global world.

“IPOB needs the help and intervention of the United States of America in gaining his release and calling for a free and fair referendum supervised by the United Nations to determine if Biafra should again be restored as a sovereign independent state among league of nations.” Powerful stated.