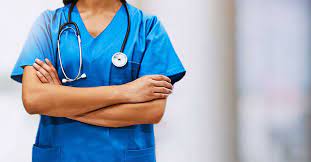 The President, Association of Resident Doctors, Obafemi Awolowo University, Teaching Hospital, Ile-Ife, Osun State, Dr Nana Fayowole, speaks with BOLA BAMIGBOLA about the alleged harassment of a young doctor by a senior nurse at the hospital

There was a viral video about a young doctor at the Obafemi Awolowo University, Teaching Hospital being locked up and harassed by some nurses at the hospital. Can you tell us what exactly happened?

access for a female adult in the orthopaedic ward on Thursday, June 16, 2022, which they obliged. The procedure was done and they were leaving after properly discarding the sharps and separated other medical waste for whoever would dispose of it because an appropriate waste bin wasn’t provided where they were.

The story, in short, is that when they were leaving, the most junior of the doctors was locked in. I was told they said she wouldn’t be allowed to leave until she disposed of the waste. We learnt that the nurse on duty did that. That led to our emergency general meeting where decisions were made.https://imasdk.googleapis.com/js/core/bridge3.519.0_en.html#goog_1451520821

Why was the young doctor expected to do that? Is cleaning up the theatre or waste disposal part of her job description?

Disposal of waste is not part of a doctor’s job description. I perform surgery from time to time and I do not think I have been asked at anytime to dispose of waste generated. If a patient is coming into the ward and he or she is vomiting or defeacating, I have never seen where the patient is made to pack the vomit or the feaces because he or she generated it. It is supposed to be a team work. When things are done properly, nurses are supposed to be there from the beginning to the end of procedures because they will continue the care. They will administer drugs and other checks will be done by them.

Do you mean it is the duty of the nurses to clean up the theatre and dispose of waste?

Since that incident, what has become of the relationship between doctors and nurses at the hospital?

It is not a nurses-versus-doctors issue at all. It is just one doctor and a nurse that had an issue. This is just a one-off thing. We have resumed work since Thursday and we have been working fine with every other person as a team. Personally, I have had interactions with a couple of nurses. There is no animosity at all.

You said that was a one-off case; but your association, in one of the statements circulating on the social media, mentioned incessant harassment of doctors by nurses. Can you clarify that?

I want to disagree with that. I have not seen in any of our statements where we made any categorical statement that doctors are being abused by nurses. When we talk of incessant harassment, we are referring to what our members suffer across the board even from patients and patients’relatives. We understand the volatility that is in the land because of hunger and poverty, but, of course, that doesn’t give anybody the right to assault anybody anywhere, not to talk of at workplace.

Nationally now, the Association of Resident Doctors has recorded about 345 workplace assault on members who are junior doctors and that is like one happening per day and it is becoming disturbing. This is the time we should be talking about how to address brain drain. This shouldn’t be tolerated in any form.

This last incident seems to suggest that there is a battle of supremacy between doctors and nurses at the hospital. Is that the case?

Well, I am not aware of that. If a patient comes and he needs to see a doctor, I have not seen where a nurse will see a patient and say, “Doctor will not see you because I am superior to the doctor.” It has not happened before in my recollection. So, that supremacy battle talk is one that I don’t want to agree with. Well, there might be other workplace-related issues.

How can future occurrence of the June 16 incident be prevented?

Like we stated in our communiqué, which the management is currently working on, we need clear-cut job description, detailed and explicit, so that people will know what they are supposed to do. A lot of time, doctors bend backwards to do things that they need not to do, but in order for the patient not to suffer they eventually get those things done. If we have clear job description, somebody cannot be held against her wish for not disposing of waste. If there is somebody who knows their job is to dispose of waste, there will no longer be arguments.

Moving forward, what kind of treatment do doctors expect from the nurses?

Doctors and nurses are inseparable. Everyone should just know what they are supposed to do. Let everyone stick to their gun in terms of ethical expectations.

But why the choice of industrial action to protest the alleged harassment?

We don’t want to have another experience where a doctor is locked up for one hour against their wish. She (the doctor) was made to endure that. Her name is flying all over the place; she keeps getting calls from everywhere. It is not good for her mental health as a doctor who is supposed to see patients. She is supposed to be in her best state to be able to perform her duties. The strike was in protest against what she went through.

Before resorting to strike, what internal mechanisms did you explore to address the incident?

The incident happened on Thursday (June 16, 2022) and we (doctors) met. Decision was reached and it was communicated to the management on Monday (June 20).