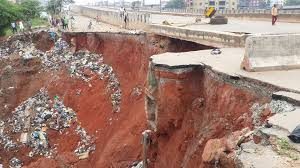 The President-General, Ebem Ohafia Development Union in the Ohafia Local Government Area of Abia State, Emeka Mba, tells OGBONNAYA IKOKWU how several homes in the community are under threat of being washed away by gully erosion

How many erosion sites do you have in your community?

I can only speak for Ebem, which is one of the communities that make up the Ohafia clan, which has over 26 villages. In Ebem, we have a chain of erosion sites that spans over one kilometre. The erosion menace is affecting our community; that’s the danger we are facing. Apart from that, we also have some short-distance erosion here and there, so our problem is that the erosion is trying to encircle our community. That is the danger we are facing.

Which parts of the community are the most affected?https://imasdk.googleapis.com/js/core/bridge3.516.0_en.html#goog_18125160

We have deep gully erosion that has cut off some parts of the Ebem Ohafia community; that is Eziukwu and Mbaga. We also have another one around the police station, where there are government facilities.

What do you think may be responsible for the erosion?

A lot of factors are responsible. Abia State is usually faced with heavy rain during the rainy season. Another factor is the poor drainage system in the community. The erosion is aided by floodwater trying to find its channel. By doing so, it washes away the soil and expands the gullies every rainy season. Another factor that I have also noticed is poor building plans. In the urban areas, there are houses with damp proof course, but it is quite unfortunate that because of lack of knowledge or poor civil engineers around, houses here don’t have good DPC that can send floodwater to the right channels provided for it. These are some of the factors responsible for the erosion menace that we have in this community.

For how long has the environmental problem persisted?

It has persisted for as long as I have lived in this community. I have always known that we are faced with this erosion monster since I was born.

Do you think it may be associated with the civil war bombings?

From historical tales by our elders, I don’t think the erosion is caused by the effect of bombings in our community. I do not have that knowledge.

How many houses are currently under threat as a result of the environmental problem?

A lot of houses have been swept away. Unfortunately, the affected families have been forced to abandon their homes. Presently, we have the palace of our traditional ruler, Ukoha Ukoha, under serious threat. That’s one of the many houses that are seriously under threat. At the end of this year’s rainy season, more houses would have gone down.

How many families do you think have been rendered homeless by the erosion?

I can’t quantify the number, but I know that a lot of people have been forced to leave their ancestral homes for makeshift apartments where they are even paying rent. They are in their hundreds if you start counting the many years the erosion has been there.

Has there been any loss of lives or injuries?

Yes. Every rainy season, we encounter deaths in the community as a result of the flood. Most times, the corpses were recovered in the gullies after many days. There used to be a community search when someone is swept away before the person is found and buried.

How badly affected is the palace of the monarch of the community?

The palace is under threat and apart from the palace, there are other residential buildings around being threatened. The affected families have kids. I met some of them some time ago when I went there. It was bad seeing the kids using the small footpath left by the erosion to access their homes. We also have our historical square there, which is called Abum; it’s not very far from the palace and it is our community assembly ground. That area is of huge historical importance to us and is about 100 metres from the erosion site.

What will be the cultural implication if the palace is swept away by erosion?

What has the traditional ruler done about it?

He has done so much. We have the age-grade system here. Most times, the traditional ruler will ask the 18 active age-grades to contribute money and give to the community development union, which I preside over to carry out palliative work on the erosion sites. He had always come out with innovations and made it an obligation for our people to always put their resources together to check the erosion. But our efforts are not enough because of the economic situation of the country. There are very few people who can access funds and give to the community. So, the traditional ruler has done so much to bring the age-grades together to raise money to check the erosion.

In what ways has the community tried to check the erosion?

Last year alone, the age-grades were told to pay N500,000 and we have about 18 active age-grade units. When you multiply that, you will see the mandate given to the community. In the same year, residents made free-will donations and we got over N2m; that’s to say that we spent over N10m to carry out palliative work at the erosion sites. That was the money we could have used to support our people facing challenges in other areas of life. We have a very huge youth population and we are also looking at human capital development by empowering the youth so that they can shun violence, crimes and criminality. We are spending so much on controlling the erosion and the money could have been used to provide a market for trading and fix some of our roads that are in bad shape.

Every year, before the rainy season comes, we try to bring innovations on how to raise money, either through the age-grade system or by approaching some of our men of affluence in the community. That’s what we are doing this year. But they are just palliative works and they don’t last for a long time. In one of the erosion sites, the repair work we did there was to build a bridge connecting two parts of the community, Gboki and Eziukwu, but the erosion swept it away. That’s why we need the Federal Government’s intervention to check the erosion. As I said before, we spent up to N10m to carry out palliative work on the erosion sites.

How has the erosion menace affected farming activities in your community?

The erosion has affected farming a lot in the community. When our farmlands are washed away, agricultural activities don’t take place. We don’t have the technology that allows farming to take place in the air. Food production has been affected by the flood.

What efforts has the community made to get the attention of the state and federal governments?

We have representatives who are from this community but not particularly from Ebem. We have a principal officer in the Abia State House of Assembly. I shouldn’t question the fact that he knows about this erosion, but sadly, nothing has come from his end, because I think his community is also threatened by erosion. But we have made it a mandate to draw government’s attention to this menace by bypassing some of these persons who have not really done much to attract government attention. What we are trying to do is to see how we can cry out to the government so that they will hear us. Maybe the cry of our representatives is not enough; we want to join them to get the government to hear us.

What has the state government done to aid residents affected by the erosion menace?

I must confess to you, having taken you around the community, that apart from one or two Federal Government projects, we don’t have any form of state government attention. That will tell you that absolutely nothing has been received from the state government concerning erosion control. Roads are not even constructed by the state government. We also want them to look inwards. Ohafia is the third economically viable community in Abia State, after Aba and Umuahia, so the government should look inwards and develop it.

In what ways do you think the Federal Government can be of help to your community?

The Ministry of Environment and other agencies that handle cases of ecological challenges can come in. There’s an ecological fund supported by the constitution, but we have not received any good gestures from the Federal Government. I will love the Federal Government to send any of its agencies to Ohafia and see things for themselves. I don’t know if any other community has the kind of gully erosion we have in my community.