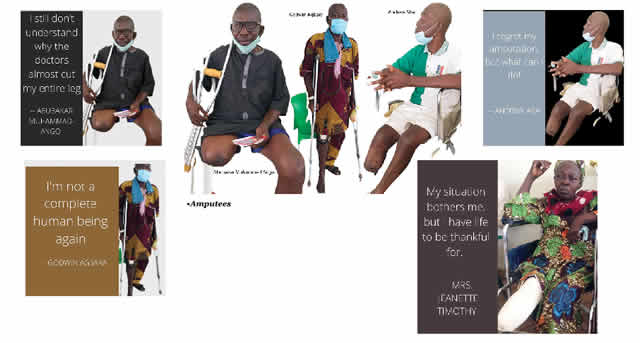 Experts say there’s been a steady rise in cases of those with diabetes mellitus. However, with little or no specialist care to handle diabetic foot, a complication that arises from the disease, Nigeria continues to breed amputees that are left on the fringes. TESSY IGOMU reports

Life for diabetic amputees is no less than a double jeopardy. From managing a life-long debilitating disease like diabetes mellitus, they struggle to adjust to a life of permanent disability brought about by diabetic foot, a consequent complication of the ailment.

“I am not a complete human being again” –Retiree

Mr. Godwin Agbara, a retired civil servant in his 60s is one of them. He was diagnosed with diabetes in 2007, and, by 2019, a toe on his right leg had developed a pin sized sore that degenerated into a life-threatening ulcer.

In order to save his life, he was amputated above the knee.

The Benue State indigenetold our correspondent that he became aware of his diabetes in 2007, after noticing that he was urinating too frequently.He confided in a friendwho suspected it could be diabetes, and was advised to see a physician immediately.

Agbara went to the Benue State University Teaching Hospital in Makurdi, and after a series of tests, his worst fear was confirmed.“I was devastated to learn that I was diabetic. I had to start treatment immediately,” he said.

Unaware that his dietary plans had to change, Agbara continued to live life normally and occasionally, indulged in alcohol. It turned out to be a costly mistake that led to the amputation of his right leg.

“I ate food rich in carbohydrates that was not good for my health. By the time I discovered, it was late,” he said with regret.“By the time the wound on my big toe refused to heal, I was referred to the Federal Medical Centre in Otupka, where the toe was removed.

Agbara, however, blamed himself for the loss of his limb and regrets going against his doctor’s instructions.

“I am like an outcast. I can’t do certain things again because of where the leg was cut. I am not a complete human being again.But as far as I am alive, I give glory to God. I still try to live a normal life. I chat and have fun with friends to avoid overthinking. I have accepted my fate,” he enthused.https://2b609f920292c7d93e81a01fd91e7324.safeframe.googlesyndication.com/safeframe/1-0-38/html/container.html

The retiree told our correspondent that the amputation has adversely affected his quality of life, noting that he has been drained financially by the ailment, and that he spends about N5,000 weekly on tests and medications that help to stabilise his blood sugar.h

Agbara said he lives on the benevolence of friends and relations, as the pension he receives can barely take care of his basic needs.

Despite being 70 and a diabetic amputee, Mrs. Jeanette Timothy embodies life. She lives each day in gratitude and moves about with the agility of a young woman in her prosthetic leg.

Mrs. Timothy was diagnosed with diabetes in 2017 and her left leg was amputated below the knee in 2018.

The petty trader, who resides in Ilorin, Kwara State, got to know she was diabetic when she started experiencing unusual fatigue. Tests later showed that she had the condition.

Recalling what led to the loss of her limb, the septuagenarian said it all started with an unnoticeable wound that became big and pungent. She said she agreed to have an amputation after the doctor told her that infection from the wound could kill her within two weeks.

Yet to come to terms with the reality of living as an amputee, the elderly woman told our correspondent that she obeyed her doctor’s instructions, and can’t understand what went wrong.https://2b609f920292c7d93e81a01fd91e7324.safeframe.googlesyndication.com/safeframe/1-0-38/html/container.html

I have given up on myself

Andrew Aba, an ex-military man, was among those drafted to maintain peace at Bakassi Peninsula, a disputed territory that lies between the border of Nigeria and Cameroon.After a five-year operation, he was withdrawn from the region in 2000, but not without consequences, he told our correspondent.

He attributed his sickness to the food they ate at the camp, adding, “They were giving us only Eba (processed cassava meal) for almost five years,” he said.“In 2001, a year after I left Bakassi Peninsula, I fell sick and was told that I had diabetes. Since then, I have been on treatment.”

Aba was amputated in July, 2020, at the Benue State University Teaching Hospital, Makurdi, after an ulcer on a toe nearly took his life.He told our correspondent that the amputation has brought him more sorrow than relief.

Presently, his left eye is shut and he can’t see with it.

“My sugar level has been unstable since then and I have tiny boils on my left eye. On March 16, at about 2.pm, the eye closed completely.

“I regret this amputation, but what can I do. My leg has been cut already. I have given up on myself and life,” the veteran said weakly.